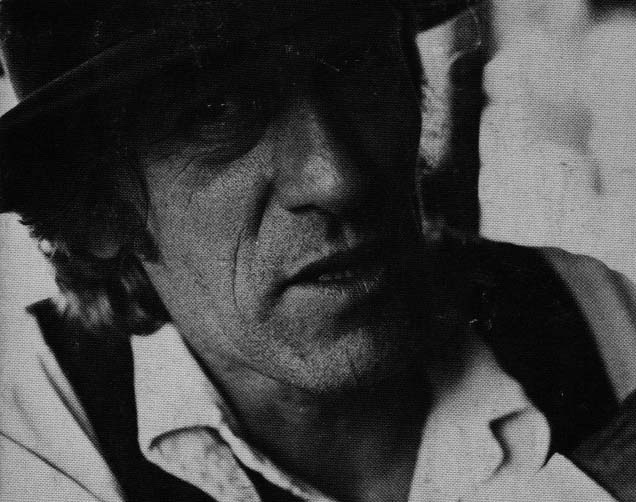 The Cosmology of Finding Your Place

The Resistantism of all other places

On the floor among filters and the Spillings

The cosmology of the floor of the Nation

The cosmology of finding your place

The cosmology of smelling and feeling your Natural place inside the place,

feeling the social spray at that level

low down, with the filters and the feet

feeling the place you can fold all four legs

and be man's best friend to the End, among the filters and the feet,

in the rock, and in the roll

in the clock and in the roll, in the hole

of the social bilge The Great White Dog

of the Rockchalk, seeks his place Seeks

The place for Him there, tries every scrap of Space The Great White Dog of

moves under the Social seeking his own Place

in the constant present snap of eternity

listening with the german dislocated castenet

thru the barren terrain of feet He moves

from place to place seeking his place

The resisters the dogs seek their place

WAYNE KIMBALL told me all this

knows about the Great White Dog of the Rockchalk

The Great White Dog of The Rockchalk

went thru the door of Western Civilization

Which is north of the Barbershop

and north of the sailor pants incense shop

The Great White Dog went between all that

and the Gaslight, The Great White Rockchalk dog shakes hands

with both paws indiscriminately

For he Seeks his own true place on the floor

He disregards the social He seeks the Place

he seeks The Space his soul can occupy

In His restless search he looks only for the Place

Where he can come to rest in his own true Place

and that might be on the floor of the rockchalk

The great White Dog is not Interdicted by opinion

He accepts the floor of the Rock Chalk as an Area,

He is preoccupied only with the Search

The Great White dog of the Rockchalk is not social

is social, he knows only persons, he doesn't

give a shit for the floor of the Rockchalk

to smoke Grass, WAYNE KIMBALL sits in the booths

the telephone and all other public Utilities

including Cocaine, The Great White Dog

of the Rock Chalk is full of shit and can't shit

until he finds his place, WAYNE KIMBALL has diarrhea

WAYNE KIMBALL is thin and knows everything that happens

He has ears, He is a corrupt little mongrel like us

turned on to everything hopeless and bullsIiit

The Great White Dog of The Rockchalk is dumb

and doesn't know anything but his instinct for the search

for his place somewhere in the litter

of the filters and tile literally dropped dreams

of the Great Rock Chalk, he smells the dreams on the floor

dropped from between the legs

of young English majors, ejected from between the

He seeks his place on top of this matter

among tile feet of the privileged nation on the floor

already predicated by cancer, the slow movement of Cancer

and I love these dogs because

they are us and more us

whether they are Resisters or just scared or both

They are the twin dogs of creation in our image

from the throne of Belief as the

Egyptians Gave and took from the Dogs Their access to Heaven

That we may all be Gods and seek our Place.

Notes:   The Rockchalk Cafe was a seedy bar at the end of Oread Avenue, much favored by hippies, yippies, bikers, and student radicals; when I last visited Lawrence in 1988, it was still there.

Wayne Kimball was a dog.